The stars of the Amboseli

Twinkle, twinkle, little star,
How I wonder what you are!
Up above the world so high,
Like a diamond in the sky.

I needed to take a few days away before departing Kenya, after saying goodbye to mum. I desired to see elephants; the gentle giants that comprehend so deeply the concept of family. Elephants coincidentally are plentiful in Aberdares, as well in the Amboseli. I had planned to go to Mt Kenya after that, and visit Treetops hotel, (the one place famous for Queen Elizabeth going up as a princess and coming down as a queen) but because of the tongue/mind slip, I found myself in Amboseli.

I had no clue at the time, but realized Amboseli is a fine place to do some star gazing. In what we sometimes percieve to be errors, there could be a hidden bonus.

As far as the eye can see, there’s what feels like a thick black canopy, which has been pulled over our heads, and it’s dotted with a constellation of stars; some shooting from one point to the next, others jumping around like popcorn in slow motion, some enormous while others, such minute specks of light twinkle feebly and yet others standing still as if in a salute, and shining so brightly, like diamonds in the sky.

We are at Kimana camp. It’s Valentine’s night, and the scenery is stunning. Since I’m a mature (*debatable) single mama, I’m blessed to have two single backpackers in my group. (I’ve spent Valentine’s day with my daughter at a romantic 4-star spa hotel in Paris, and still shudder at the memory, and still ask myself what I was thinking.)

I wasn’t feeling too chatty on this tour, I needed space and silence; but from the time I entered the tour van in Nairobi for the drive to Amboseli, the two backpackers immediately drew me in with their friendly banter and energy. There was no curling up in a corner, in foetal position to feel sad and sorry for myself. None of that. *Just what the doctor/universe/God/all of the above ordered.*

Brandon from Australia and Dee from the U.S are backpacking through Africa and offer great company and interesting yet opinionated conversations. We’ve had a tasty candlelight dinner and are now sitted around a crackling bonfire, our heads tilted upward in 45 degree fashion to the stars, and our eyes soak in the views. I feel like heading to my tent, but I’m iffy about walking alone in the bush. 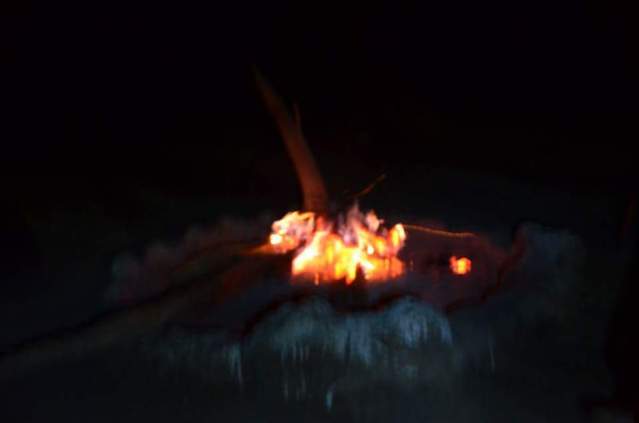 Camp Kimana is fenced, so we’re okay, the park rangers say; but the first night we briskly walk on paths to our respective tents behind our ranger who’s shining a bright torch, my hair stands on edge, as if in anticipation of some animal springing on us from the surrounding bushes and thickets (cue: all those feral stories about Africans co-existing in the wild with animals are Tarzan tales, comic-book fables…so scratch the whole lot of them.) I’m also fearful of reptiles that would be slithering about, waiting to be trodden upon so they can strike back. So as always, safety is in numbers.

We arrived at Camp Kimana in darkness, after quite a dusty road trip, so there’s no telling what the crack of dawn had to offer. But imagine waking up to Mount Kilimanjaro on your doorstep, glistening in the sun. You’d feel like changing your itinerary, and staying here for good. 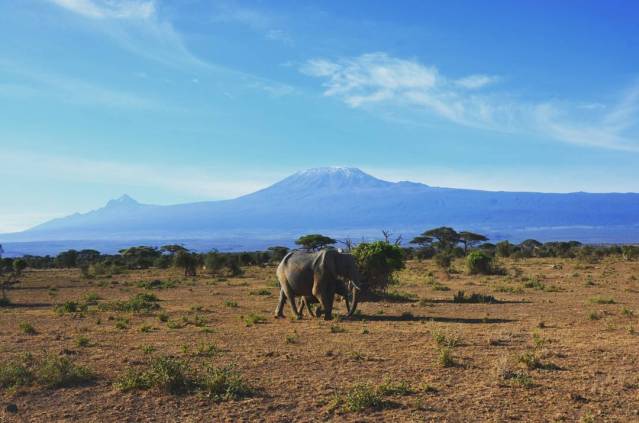 Elephants in the foreground, Mt Kilimanjaro in the background. Picture perfect bliss.

I’ve seen pretty grand scenery. There’s been the mountain meets sea combo that Kotor, Montenegro offers each morning, but this is something out of a bestsellers ‘African safari’ novel.

We get to meet the real stars of the Amboseli when we encounter different animals on our game drives. Elephants are the draw factor here; the Amboseli is world renown for having the largest population of free-ranging elephants. The over 1,200 elephants here include 58 families and close to 300 independent adult males. Each elephant is special; with each one named, numbered and coded. It goes without saying that the elephants of the Amboseli are well celebrated, given the extensive body of work and research that has been done on them.

Wildebeests and zebras are in plenty, scattered around the park. We see animals like hyenas, warthogs, and a few lions. There are as well playful baboons and the colourful grey crowned cranes.

We stop for a packed picnic lunch at ‘Noomotio‘ observation hill, a place that offers great panoramic views of the landscape.
Noomotio was formed through volcanic activity of Mt. Kilimanjaro. Kilimanjaro itself was formed some 750,000 years ago, and its geological changes continued for 250,000 years. During this period, a number of upheavals and tremors caused formation of 250 volcanic hills and crater lakes around Kilimanjaro. This was in the Pleistocene period, which stretched from 2.5 million to 11,700 years ago.
The swamp seen beneath the viewpoint is called Enkongu Narok Swamp. It is one of many swamps owing its existence to Mt. Kilimanjaro. Rains and snowmelt from the mountain form underground springs that feed the swamps, which attracts hippos, giraffes, zebras, cheetah and a great variety of birds. Kilimanjaro is Africa’s tallest mountain and its name means “Place of Water” in Masai. 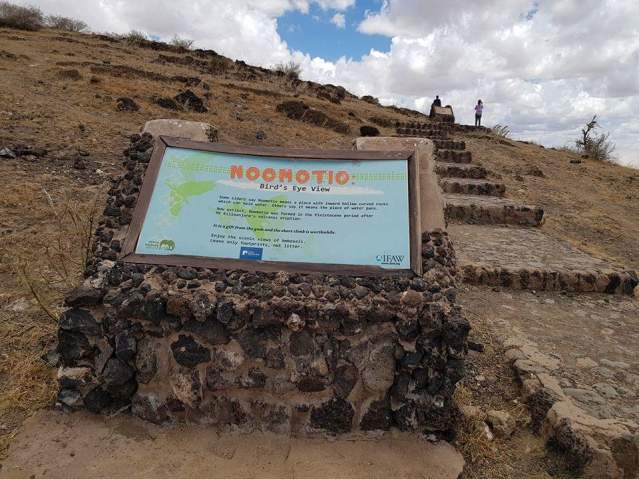 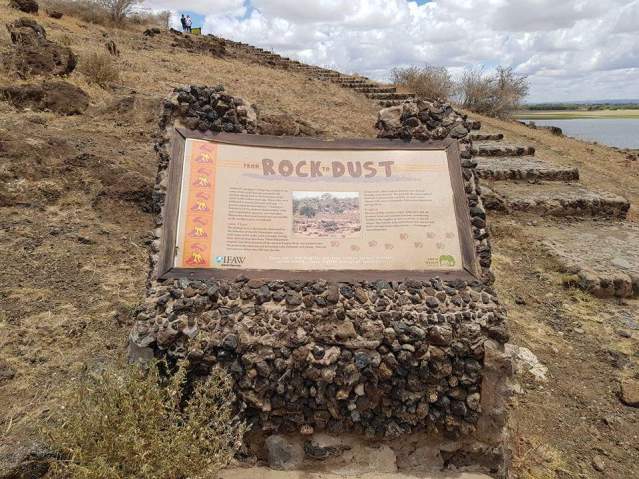 Selfie in the foreground, new friends Dee and Brandon in the background.

We were on this tour of the Amboseli courtesy of Alex Ogutu, Trinity Travels and tours for a subsidized fee of 250 euros equivalent.

All prepped up for the Amboseli game drive. #TembeaKenya🇰🇪 #Amboseli #VisitKenya #solotravel #blackgirlmagic 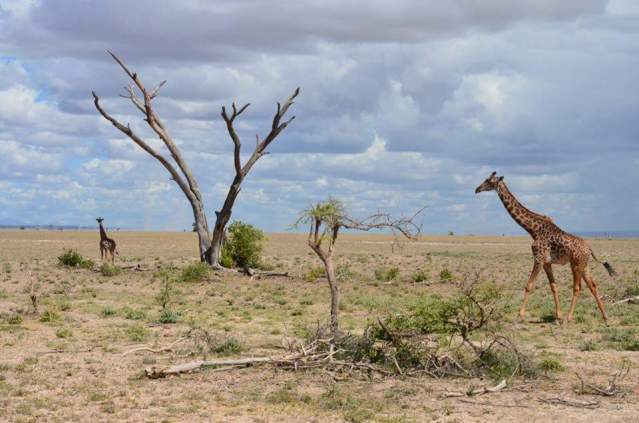 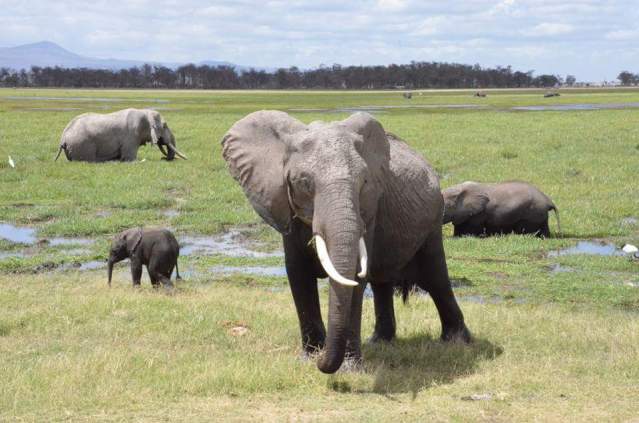 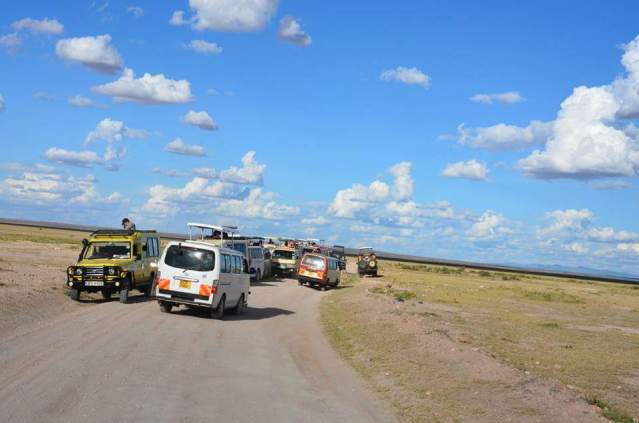 The rush to take pictures when lions have been spotted. 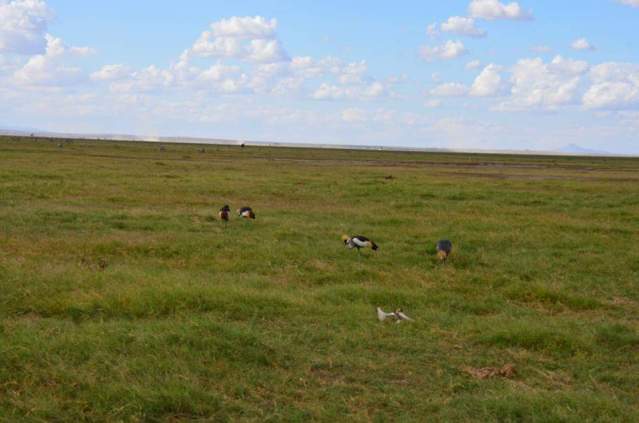 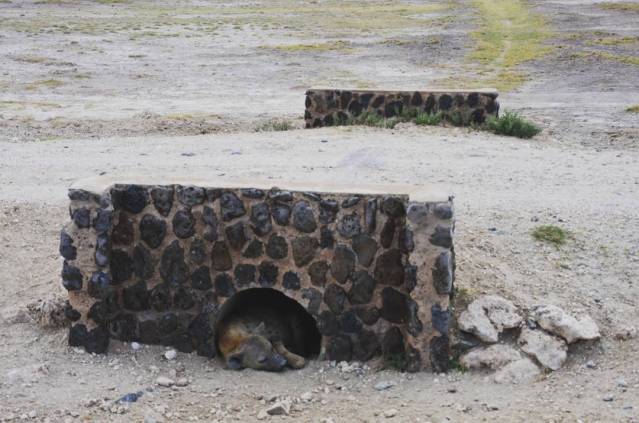 Hyena sleeping in a ditch, Amboseli.